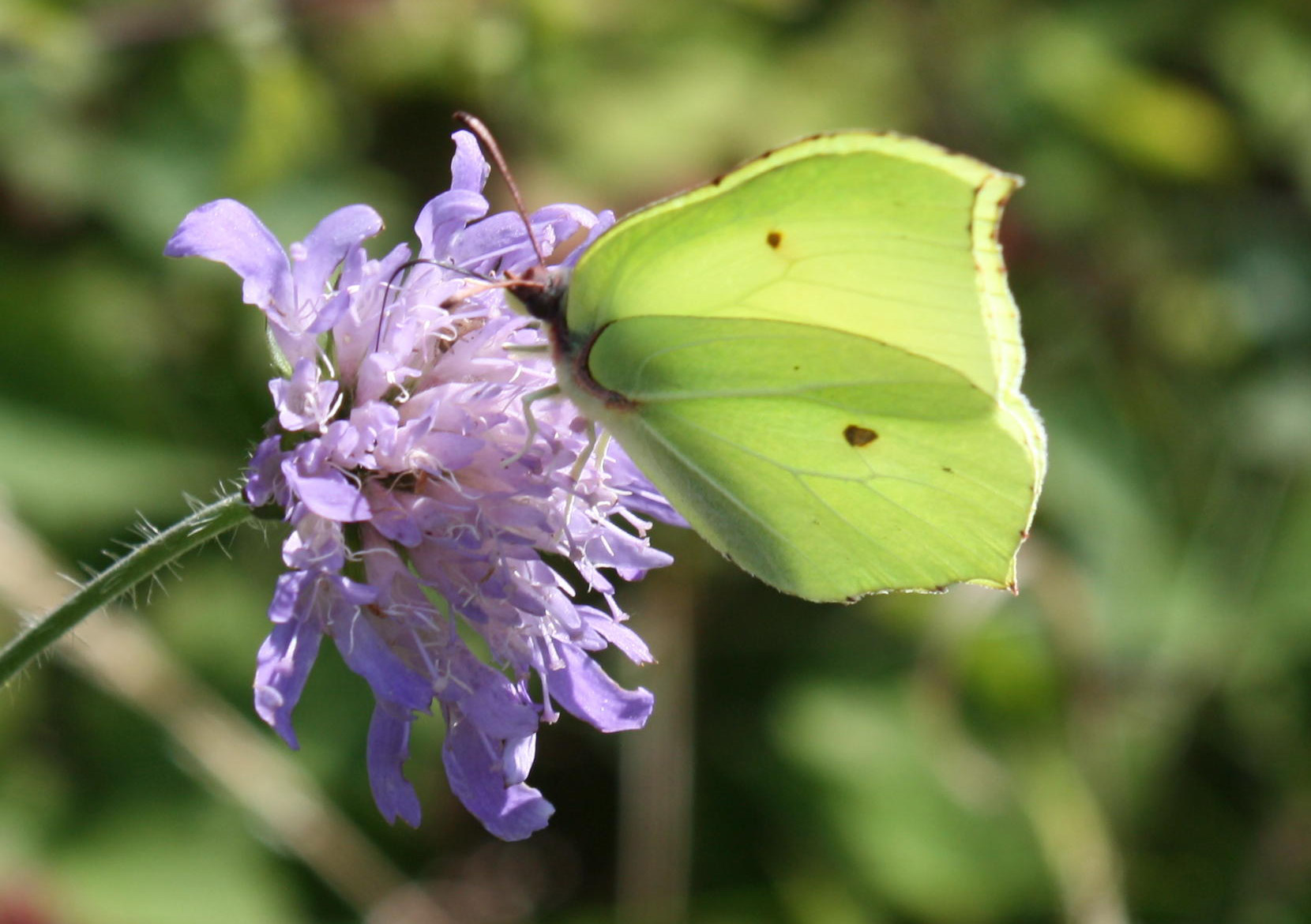 The first time I entered a Chemistry Lab. at school I noticed a jar of bright yellow powder. To my disappointment it was nothing to do with the sherbet lemon sweets that I was familiar with in other glass jars. The label stated simply “Sulphur”. Brimstone is another word for sulphur.

Having featured birds in recent Nature Notes it is time to give invertebrates a few paragraphs. In Britain we have two very bright yellow insects, the Brimstone Butterfly and there is also a Brimstone Moth.

April is a good month to see the Brimstone Butterfly. It hibernates as an adult insect and is usually one of the first butterflies that you will see in your garden each year. Given mild, sunny weather it may even be seen as early as February, but more commonly first sightings are from mid-March onwards.

Males are a vivid yellow but females are a creamy white. Both sexes have small orange/brown spots, one on each wing. You may see these butterflies around primroses and daffodils, looking to find nectar.

In mid-summer they ‘disappear’, only to return in good numbers in the autumn. At this time you are more likely to see them around purple flowers such as thistles. These autumn Brimstones Butterflies are the young of the ones seen in spring and will eventually go into hibernation before reappearing next spring.

Brimstone butterflies are common in the southern half of the UK but the Brimstone Moth is widespread and fairly common throughout the UK. It is bright yellow with orange markings on the ‘leading’ edge of the wings. It is one of the ‘geometrid’ moths meaning it rests with its wings open forming a triangular shape, not unlike some butterflies.

The Brimstone Moth is on the wing from April to October. In favourable conditions there are three generations each year. Brightly-coloured, recently emerged adults can be seen at any time from spring to mid-autumn. However the later generations are smaller than April/May insects.

Two of its favourite food plants are Blackthorn and Hawthorn which are two of the commonest hedgerow trees in Leicestershire. The Brimstone Moth will pass through your garden regularly. If you look around any overnight lights on or near your property you will sooner or later find one.

Brimstone butterflies have 70 generations in a human lifetime and the Brimstone Moth has in excess of 140 generations in the same period. In theory at least, insects have greater potential than man to adapt/evolve to meet the challenges of climate change, provided that we do not destroy their food plants.