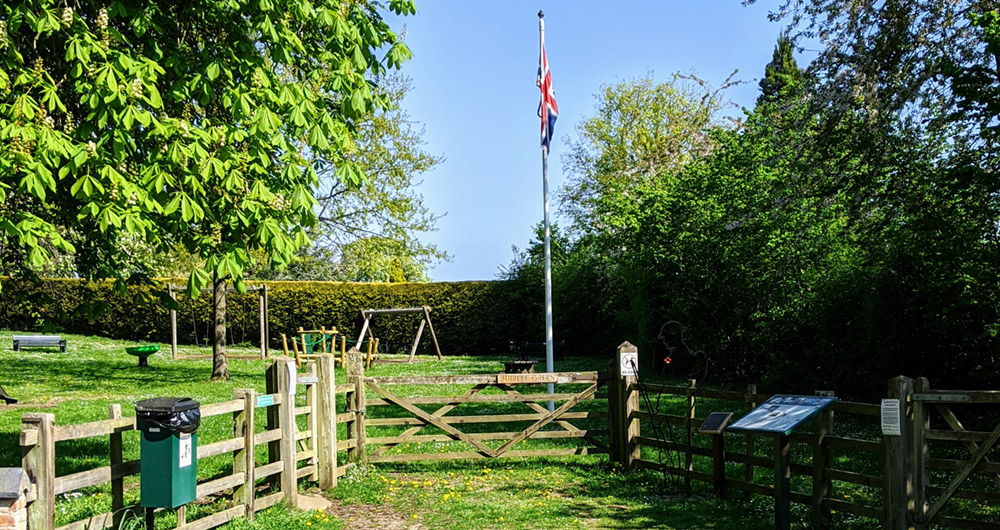 The morning of 23 April dawned and as chairman of Kibworth Harcourt Parish Council, I prepared to go to Jubilee Green on Main Street to lower the Union flag, that has been up for a year and replace it with the red cross on white background of the St George’s England flag. I had carefully stored the flag together with the key to unlock the small access panel on the rear of the flagpole so the mechanism holding the flag halyard could be loosened. The Parish had bought two new flags to replace the previous worn ones. We had raised the new Union flag and it was now time to do the same for the England flag on the national saint’s day.

Down at Jubilee Green, my first problem was getting through either of the two pedestrian gates. Both had been securely fastened by the parish councils’ new groundsman to prevent people entering and using the play area following government regulations in March. Fortunately, I have a key to the padlock for the main five bar gate used by the contractor for mowing the area during the growing season.

Unlocking the flagpole access panel, I carefully held onto the long end of the rope to ensure it didn’t fly up the flagpole and out of my reach, then moved the halyard inside the small space to release the mechanism.  But nothing happened. There was no sudden lowering of the Union flag and rush as the spare end of rope whizzed up inside. I repeatedly jerked the rope for several minutes to try to release the jam, but to no avail. Reluctantly, I carefully tucked the rope end back into the pole, relocked the access panel, picked up the white and red flag, still folded in its original plastic bag, and went back home, and put out an apologetic tweet explaining there would be no St George’s flag raised this year.

One of the journalists on the Leicester Mercury spotted my tweet so rang for more information. I’m sure he had no inkling that his call would lead to a surprising end to this unusual tale. He asked for a photograph of Jubilee Green with the Union flag flying and then asked me to unfurl the white and red flag and take a photo of that too, so he could complete his story. I already had a stock photo of Jubilee Green with the flagpole and Union flag, so took the plastic bag containing the flag into my kitchen to unwrap it. As I slowly unfurled the creases, the white bits were as expected but instead of the expected red cross, to my disbelief there was a red circle – it was the Japanese national flag!

There had been no need to unwrap the flag safely before now as it had been wrapped in its original plastic bag since arriving from the supplier, and stored with the flagpole key.  Following the day’s problems, the parish council clerk now has two tasks – firstly to arrange for the flagpole mechanism to be serviced to unjam it, and secondly to contact the online flag company to explain the error of them sending us a Japanese flag and ask for its replacement with an England flag. The story appeared in the Leicester Mercury on Saturday 25 April.  Unexpectedly, the simple story of changing a flag caused some amusement across the county to relieve our lockdown boredom. What fate decreed that the flagpole mechanism should jam and so save any embarrassment of me flying the wrong national flag?