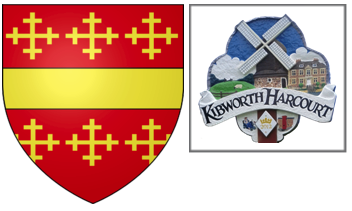 Both Kibworth parish councils, along with others across the Harborough District, were given a grant by the District Council to celebrate VE Day this year in May.

The lockdown stopped all the plans that both councils had for celebrating the 75th anniversary.

A bit of brainstorming at one of the council meetings came up with the idea of a commemorative bench, and to honour the 75th Anniversary of both VE and VJ Days.

In order to identify and then order an appropriate bench it was agreed that both Kibworth councils would contribute their HDC grant money and then, if further funding was required, to split the cost 50:50.

A location somewhere near the parish boundary was agreed and it was installed on 26 August opposite the west end of St Wilfrid’s Church next to the church car park entrance.

Despite the church being in Kibworth Beauchamp parish, it lies within the Conservation Area for Kibworth Harcourt!

The bench has engravings on three of the back slats:

To commemorate the 75th Anniversary of VE/VJ Day

This latter line is a comment made by Her Majesty Queen Elizabeth II while celebrating with the crowd in front of Buckingham Palace as they celebrated VE Day back in 1945.

Many thanks to Cllr John Hooley who saw through the design and ordering of the bench. Chris Bradburn for drilling the holes and fastening the bolts to hold the bench secure. Maria Smith, the Beauchamp parish clerk, who administered the whole process.